White and Dark Baker’s chocolate chunks is a great start to a cookie recipe.

My cousin, Stacie, and I stumbled across the movie, The Long Kiss Goodnight sometime in the university years not really expecting much but a decade later it’s still our fave movie to quote to each other – along with Austin Powers, of course.

It’s been years since I’ve watched it, but it practically leaped off the shelf, begging to be viewed. And so, as I collected the ingredients for the next batch of cookies I would experiment with, Geena Davis, Samuel L. Jackson, and Brian Cox came to hang out in my living room. SO thrilling, SO funny, and SUCH mystery and suspense. Also, there’s some other rather attractive man, though he IS the bad guy. What more could one want in a movie? Geena Davis TOTALLY kicks ass and Samuel L. Jackson is just so ridiculous, almost everything he says results in fits of laughter.

All the best quotes are lost without the context, tone of voice, and facial expression, so I won’t even go there, but I very strongly recommend it for immediate viewing! 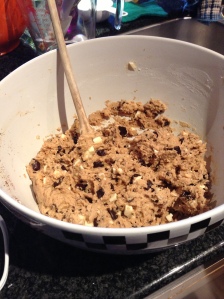 That satisfied my need for humour, action, and visual entertainment; the cookies to come were for my taste buds!

I went straight for the simplicity of a Kraft peanut butter cookie recipe with a KICK! Hmm… I was going to include a link to the recipe on the website, turns out it’s not there, only in the what’s cooking quarterly magazine.

A steaming cup of Earl Grey tea and my PB cookies that spread WAY bigger than I had anticipated capped off my evening too perfectly for any more words.

I’ll post the recipe if desired, just leave a comment for me and I’ll get right on it! Happy Father’s Day weekend.

Agent: Hey, honey, this is a real big f**king gun.
Mitch Henessey: This ain’t no ham on rye pal.
Charlie: What the hell are you doing?
Mitch Henessey: Saving your life. I would have been here sooner, but I was thinkin’ up that ‘ham on rye’ line.
~ The Long Kiss Goodnight

In the spirit of the 25 cm of snow accumulating outside my wall of windows on this fine mid-April Sunday, I felt drawn to baking my fave choco chip cookie recipe in preparation for an afternoon of Christmas music and … END_OF_DOCUMENT_TOKEN_TO_BE_REPLACED

Almost Wise
Sprout's out!
The People of Calgary

Because not everyone in Calgary is a Cowboy

The art of making a silk purse out of a sow's ear.

Crazy is relative. Just ask my relatives. And music!